Jonathan Lin at NJ.com reports on the grand opening of Park Bayonne. 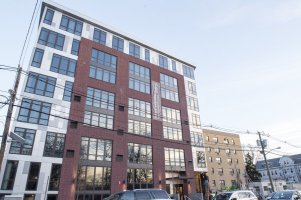 After a months-long delay, city officials and developer Lance Lucarelli cut the ribbon this week on “Park Bayonne” — a seven-story, 60-unit luxury apartment building — and are calling it a step in the right direction for the city.

The building, located across the street from the Stephen R. Gregg/Hudson County Park at 1040 Kennedy Blvd., stands 75 feet tall and towers above the surrounding neighborhood of mostly two-story homes. The view from the top offers clear sights of the Manhattan skyline, Port Newark, the Bayonne Bridge and the Turnpike Extension Bridge.

Bayonne Mayor Jimmy Davis said Park Bayonne “represents the kind of investment that we want to see in Bayonne.”

“My goal is to ensure that this type of quality product is delivered to strategic areas throughout our community in the coming months and years,” Davis said in a statement.

Lucarelli of The L Group has previously said he hopes Park Bayonne — as well as other projects he has in mind for the city — will help address the economic decline he’s seen in the city over the years.

He reiterated that sentiment at Tuesday’s ribbon-cutting.

“The city’s going to be great. The whole city’s gonna change because of this,” Lucarelli said.

The project, which has a five-year tax abatement from the city, includes a parking garage with 71 parking spaces, he said.

Community amenities at Park Bayonne include an indoor rooftop lounge, an outdoor rooftop patio with grilling stations, a fitness center, complimentary shuttles to the Hudson-Bergen Light Rail, and other features, the building’s website states.